The irony of that title is literally killing me.

Anyway, since this blog is supposed to be a sort of jack-of-all-topics kind of thing, I’m starting up a series to coincide with the Weight Loss Series. I figured since I’m spending a lot more time focusing on my health, I should also be paying attention to the bits of me that don’t necessarily benefit from going to the gym.

It’s funny, but once you start adapting to a more active, healthy lifestyle, you really do start to think about all of the things you put in/on your body. I’ve gotten much pickier about what kind of produce I buy (much to the annoyance of my family/wallet), and I’ve long since stopped eating most processed food and all fast food. Going to the gym and jogging 6 days a week has been doing wonders for my body tone, but now that I’m kind of in the zone, I’ve been thinking about what else I can do to support my overall health.

My extremely beautiful and awesome friend Rochelle, who is one of my biggest fitness inspirations, linked up a post on Facebook about a woman who had given up shampoo in favor of what is apparently floating around the internet as the “No Poo” method (these puns will be the death of me). The method entails forsaking sulfate-loaded shampoo and conditioner in lieu of baking soda in order to remove oils from the hair and apple cider vinegar for conditioning. The idea itself intrigued me, especially since my hair is really prone to flyaways and frizz, no matter what I do with it, so I debated over giving it a shot. I was a little worried about the whole baking soda thing because testimonials from those wiser than I claimed that baking soda was too harsh for hair, because it’s a high pH alkaline. But my resident natural product guru Anna assured me that using apple cider vinegar would help mitigate any damage that the baking soda could do, along with a dosage of coconut oil. And as luck would have it, I happen to have an abundance of both in my pantry and I’m fresh out of shampoo! Hooray?

So let’s figure this shit out, one week at a time. Is baking soda and ACV a better alternative to shampoo, or does it cause damage in the long run? A&L will be figuring it out!

At least if it works on my hair. Your results may vary 😀

So to get started, here’s a look at my hair in its current condition. 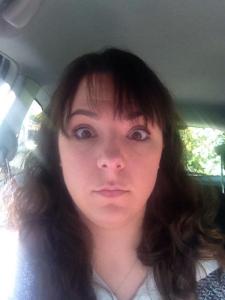 My hair in its current state of poof.

As you can see, my hair is curly and fine, and prone to some major poof in the right conditions. I get split ends very easily because curly hair goes hand in hand with brittle cuticles, and this, naturally, leads to some major frizz if I let the dead ends get out of hand, so I have to trim the ends off roughly every 2-2 1/2 months. It’s kind of a pain because I’m trying to grow my hair and I end up cutting off all of the growth I’ve accomplished to keep it from looking brittle and frizzy. My hair is fairly healthy, but the problem is that I shampoo it almost every day because I sweat so much when I exercise, and dry shampoos never really did the job. So I’ve become increasingly worried that my hair is going to start paying the price for my frequent need to shower, especially because it’s prone to drying out.

But anyways, let’s talk about the ingredients. 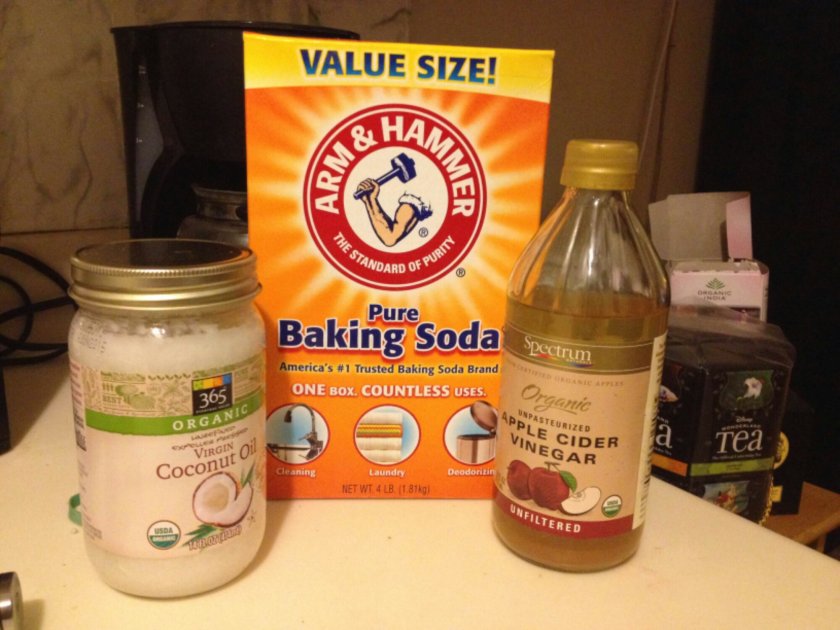 All three ingredients are incredibly easy to find at pretty much any reputable grocery store. Baking soda has been around since the dawn of creation, and apple cider vinegar is currently enjoying a renaissance due to the health world’s espousal of its multitude of health benefits. Coconut oil is making a splash lately since its promotion by supermodel Miranda Kerr, who I would, quite frankly, murder a village to look like (Don’t worry, I plan to stick to diet and exercise, and conveniently forgetting that she only eats fruits, vegetables, and fish). Coconut oil is meant to be used only on occasion because you do need some kind of soap to thoroughly clean it, but it reputedly makes for an excellent deep conditioner, since raw, unrefined coconut oil is the only oil with a molecular structure that allows it to penetrate the shaft (giggity). Make sure that you’re using raw, unrefined coconut oil, since the refined stuff has an altered structure.

As far as measurements go, I’ve heard 1/2-1/3 a cup of baking soda per wash, with enough water to make it into a paste; but I don’t buy that. Remember, baking soda is still an alkaline, with a pH balance of 8.3-9 on a 1-14 scale, whereas healthy hair and skin has a pH of around 5. So for the initial bit of this experiment, I added more water so that I had a solution that was roughly the consistency of milk. I figured less is better, as long as it still cleans. As far as ACV, an ideal ratio would be 2 tbl to 8 ounces, or one cup of water. Any less water will make it harder to wash out the smell.

For containers, I just recycled my shampoo and conditioner bottles for their less chemically counterparts. Recycling is good, children.

I opted out of doing a coconut oil conditioning, since I showered late last night, and I was substituting in the morning. Plus I had no soap to wash it out with. Don’t judge me.

So I mixed up my solutions, brushed and detangled my hair, and I took a shower. Sorry, no pictures! I focused the baking soda on my scalp first, then the rest of my hair, and it felt WEIRD. I guess it’s because I’m so used to having sudsy, sweet – smelling stuff in my hair when I wash it, not some strange gritty nonsense. But I scrubbed it and rinsed like usual. With the ACV, I soaked the ends of my hair first before applying to the rest of my hair, since my ends are often the driest bit. The solution rinsed out easily, and didn’t leave any lingering vinegar smell. I normally don’t blow dry my hair and I’m not about to start now, so I brushed my hair again, put it up, and went to bed.

When I woke up this morning, I did notice that my hair was very clean, but was definitely drier than usual. I didn’t have any concerns, however, since this is a common issue when starting out. Shampooing normally strips the hair of all oils, including the essential, so the scalp has to pump out even more oil to make up for the loss. As a result, when switching to the “No Poo” method, the hair and scalp have to readjust to the chemical change, which means dry hair for the first few days. I’m not planning to do the coconut oil conditioning until tomorrow, since I’ll be challenging the “No Poo” method with my post – gym hair, which will be way greasier than my hair last night, and the fact that it’s my birthday tomorrow and I think I deserve a little pampering. So expect a report tomorrow sometime about whether coconut oil is as awesome as Miranda Kerr says it is. Until then, happy washing!